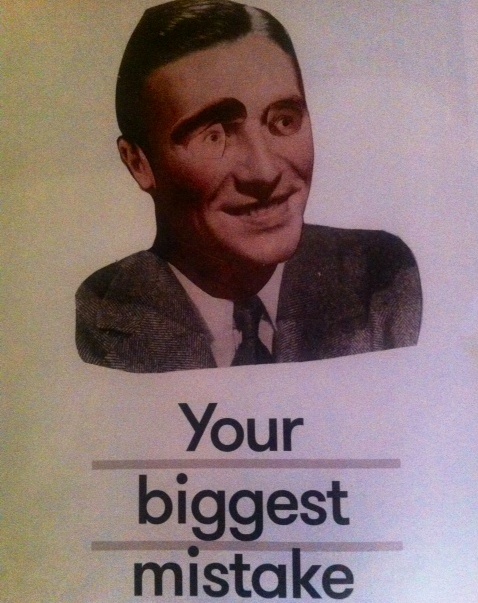 The complete article I wrote for the feature, ‘Your Biggest Mistake’ in the September 2013 issue of Totally Dublin. Other editors and writers who contributed to this feature are Conor Creighton, Darragh McCausland, Jean Sutton, Kevin Breathnach, Sarah Davis-Goff and Dan Bolger. I am grateful to Laura Gozzi for the opportunity to put these ideas in print.

Liz Calder, founding director of Bloomsbury, has said ‘if you’re a publisher you can’t also be a best friend, only a very good friend. You have to toughen up’.

To be an editor you must develop a system to help you see the thing you’re looking for, first time round. So, my definition of a second chance is more like a last chance. But following the rules of grammar and learning a house style are nothing compared to handling the hopes and dreams of an author.

My biggest mistake occurred late in my first job in publishing with an academic press here in Dublin. Spending eight hours a day poring over scholarly manuscripts gives sincere weight to the ‘attention to detail’ part of your CV. I had got to a stage where I was allowed to meet with authors and discuss alterations to their texts. One author was particularly keen that his PhD thesis be published just as he had written it. The subject of the book was of a North American persuasion (he hoped it would sell well over there too), and he had taken the liberty of using an American style, for example, putting the month before the date. Being the last one in, it was my gorgeous job to tell him that we would be changing many of these elements to the British style, to which he had strong objections.

It is amazing how bringing a manuscript within a press’ house style can be considered by some writers as the correction of an error in their work. That’s why it’s called style; it’s unique to each publishing house. I think my older, wiser colleagues were tickled by how seriously I was entertaining this author’s concerns about the tiniest details of his text, when they wouldn’t have even mentioned them to an author if it were their job. Anyway, we got through the style debacle and the book went to print. This press often received advance copies (galleys) just days before publication and sometimes even afterwards, such was their willingness to stand over their decisions and trust that nothing horrendous had happened. Well, the galleys for this book arrived over morning coffee and I decided, unusually, to scan them.

Inexplicably, somewhere during typesetting, a whole section of footnotes had been swapped from one end of the book to the other. I was flummoxed, because for the whole of the preparation of the book, the footnotes had been the least of my worries. I got one of the few bawlings of my career from the publisher that day (all the others came from him too). I had to literally ‘stop press’, while I hauled out the last proofs again to discover at what point the mix-up had occurred.

I know now that the mistake I made was not to misplace the footnotes. That really was a spook in the machine moment. My mistake was to be overwhelmed by the presence of this author in the preparation of his book for publication. What I learned was not to let an author’s opinion of me conflict with my job to carry their work to their audience. The author-editor relationship is a professional friendship, which is under threat because it is based on trust, confidence and responsibility. Now, as editor and publisher of THE SOUTH CIRCULAR, while I agree to take care of someone’s story, I’m also agreeing to not take them for granted. Writers write, editors edit. And if I must leave a writer to write, she must leave me to edit. When I do my job well, the authors’ words will appear luminous to the reader.

I have a few personal rules. There’s a time and place for celebrating your achievements. It’s important to know when something is ready and to let it go. You hold your breath until the book lands on your desk, bound, trimmed, covered and price-tagged. You know that if you look hard enough, you’ll find something silly and annoying. But that’s the agony and ecstasy of publishing: pride in doing your best and humility in knowing there’s more to do.

I approach each manuscript like it is an equation that needs to be solved by being published. And editing means to weigh up everything systematically and to make my mark once, coolly, and to move on immediately, not daring to look back. Publishing is to not second guess my best training, my best ideas, my best instincts. Editing and publishing THE SOUTH CIRCULAR is using all of these things to become the person I want to be.

I’m willing to be corrected on everything I’ve just said, and this is why I love publishing. It is still a creative business which requires a lengthy and intense and sometimes mortifying apprenticeship. What’s more humbling than correcting your own mother tongue? I believe we are only as good as the last issue of THE SOUTH CIRCULAR we put out and we can still get it wrong with the next one. But something drives that reach for perfection and the risk taken with each new story. I’m going to say something that might be controversial here: I don’t consider a story complete until it is published. That’s something I look for in choosing work for THE SOUTH CIRCULAR: something that will survive publication, something that might even be better for having been published.