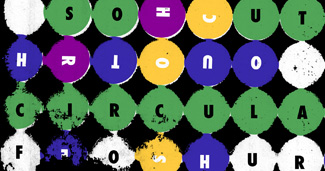 To predict or measure the workings of another human’s mind, exact motives and expectations that are not our own, is near impossible. To know a little is just about all we can hope for. And in some way, it’s what we live for. Giving a part of ourselves, however small and packaged it may be, is an act of generosity and bravery not easily taken back. Every day, we send ourselves out to the world and every day, we risk not receiving a similar gift in return.

That the emerging writers in this issue, Anthony Colclough, Michael Naghten Shanks, Margaret O’Brien and Cathal Wogan, have taken the risk to write what are in effect fantasies and to hand them over to us to publish here, is a testament to the kind of trust and risk we at THE SOUTH CIRCULAR are thriving on. For like The Gift of the Magi by O. Henry, in which a young couple in love sell their most prized possessions to purchase a stunning gift for each other, it is often not the gift itself which resounds with the receiver but the intent to locate, create or procure the gift.

At the same time, when a writer takes it upon themselves to first imagine a mind not their own, to then describe an experience not lived by themselves, to find an outcome not yet known to them and then hands that story over to be published and read, we as readers hold our breath. For what can we give in return? Of course, the simple act of reading the thing is often enough to warrant the effort of creating it. This is the deal struck every time we begin to put an issue of THE SOUTH CIRCULAR together and it’s an ancient barter system of which we are proud to be a part. As our world encounters yet another economically challenged era, where known values and aged ethics are tested, we see more and more the exchange of skills, customs and talents by our esteemed peers becoming a currency; a currency perhaps impossible to make redundant.

So, for the jacket of issue 4, we commissioned Reuben Whitehouse of Rocketfuelled and Jessica Herbert, British graphic designers based in Montréal, Canada, to create a typographical cover. Of the work, Reuben says: ‘This is largely inspired by the futuristic aesthetic that’s at large in Montréal’s metro system. I had the idea of making a design which you could read whichever way round you held it. So this one evolved from a sketch to Illustrator to a rough screen print to a scanner to Photoshop and finally to the JPEG you see here.’

We are delighted these four writers and two artists decided to attach extraordinary traits to such familiar pursuits as urban travel, addiction, an Easter school play, a holiday abroad and the peeling of potatoes. We hope you can accept theirs and our simple gift as a stunning piece of generosity and risk.